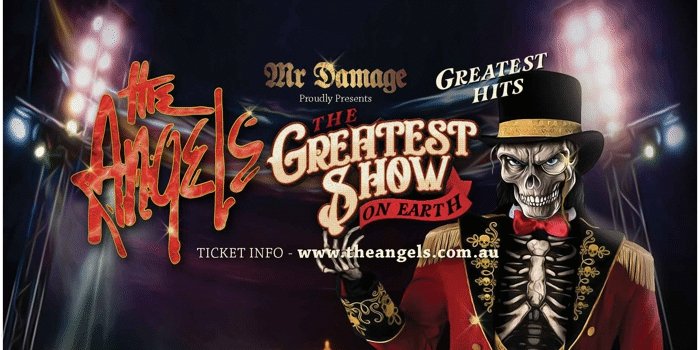 The Angels have put something special together for their fans, and it doesn’t get any bigger or better than this… “The Greatest Show On Earth” tour is packed full of hits – and it is expanding in 2023 to take in the East Coast of Australia!

They kicked off in Adelaide, the birthplace of the band, followed by shows in Melbourne, New South Wales and Queensland. We’re talking wall-to-wall hits – Am I Ever Gonna See Your Face Again, No Secrets, Take A Long Line, Shadow Boxer, Marseilles, Comin’ Down, After The Rain, Face The Day, Fashion and Fame, Let The Night Roll On, We Gotta Get Out Of This Place, Mr Damage … and more.

As the book The 100 Best Australian Albums points out, “The Angels can lay claim to being Australia’s longest-lasting band.” They have been on the road consistently since 1974 and it took a global pandemic to slow them down.  Now the band is itching to get back on stage and they’re not mucking around!

“We’re back out there and doing what we love doing,” says John Brewster. “It’s time to rock.”

Let The Night Roll On…

This is it folks, over the top!