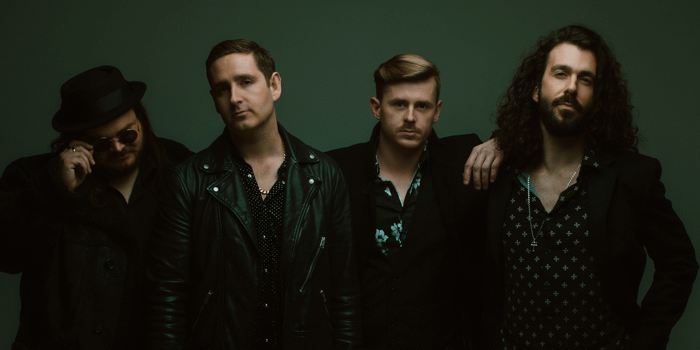 What is the Kingswood sound?

Is it the brazenness of the guitars that drove their debut album Microscopic Wars? Or perhaps the melodic, vintage sounds of their sophomore effort, After Hours, Close To Dawn; or even the darkly enticing pop threshold crossed with 2018’s ‘Messed It Up’ release…

It’s the sniff of rebellion and the taste of a challenge that has spurred Kingswood on across an almost decade-long career. A creative hunger that threads each release together. Defined by simply being undefinable, the Melbourne band has been on a journey of discovery and creative growth since the ARIA-nominated Microscopic Wars put Kingswood on the national radar in 2014. This was followed by countless sold-out tours, ARIA Gold Accreditations, song writing awards, tours with AC/DC, Aerosmith and a total of 5 eclectic and critically acclaimed albums to date.

Establishing themselves as one of Australia’s most formidable and engaging live acts, Kingswood‘s drive and ambition in reinventing and flourishing within the realm of new sonic influences has remained at the centre of their work.

Don’t miss them when they come to Beenleigh Tavern on Saturday 3rd Sept 2022!